Vastu Shastra recommends some principles for construction of water sump in the building. According to Vastu, water elements should be available in the Northeast of the building. The following are some principles to build overhead and under ground water tanks.
The best place for digging the sump is the North-east of the plot. This leads to increase in wealth, prosperity and knowledge. While digging the sump, an axis should be drawn from the Northeast corner to southwest corner. The sump should be dug to the right or left side of axis. The sump in east of northeast is most beneficial and the sump in north of northeast is also good.
The Sump should be located in the North-East corner : The Logic -Since Vastu recommends that the North-East corner of a site be left open, to allow the useful morning sunrays to enter the House,  it makes sense to have both the Water source as well as the Sump close to each other in this corner (since they are anyway under the ground and will not obstruct the light). However, if the sump is used for storing the municipal water, it makes  sense to have it in the  front, as you will need a shorter connection to the municipal water lines.
The Sump should not touch the compound walls or the building walls:The Logic -The sump should be a separate structure and should be kept a little away from the compound and building walls, to prevent any kind of dampness from seeping up the  walls.

Water sump should not be towards Southeast or Northwest. The sump in the Southwest is worst. Avoid water sump at the center of the house.
BORE WELL AND UNDER GROUND WATER TANK—

If theses be inside the house, consequences are serious. When outside, their effect is minimum..

Note: All above principles are applicable to residential as well as commercial buildings.

WHAT ARE THE VASTU GUIDELINES FOR THE DESIGN OF AN OVERHEAD WATER TANK?

The Overhead tank should not directly rest on the roof slab: The Scientific Reason – In case there is a leak in the tank, the dampness can seep into the building causing structural damage and fungus growth which is not good for the health of the family.
The Overhead tank should be at least .′ (6.cm) above the topmost roof slab: The Reason -The higher the water tank is above the building, the greater will be the pressure of water, thus enabling the water to flow in full force in all the taps.
The Overhead water tank can be lined with light coloured tiles: The Logic – This will ensure cleanliness of the tank, as it is easy to maintain and there is less likelihood of growth of fungus. Moreover, the white tiles allow one to see all the dirt while cleaning.
Avoid plastic water tanks as far as possible: The Scientific Reason – We are still not sure about the health hazards of storing water in plastic containers. But today because of the convenience of plastic tanks and the inevitable leakage of concrete tanks, we are seeing more and more plastic water tanks. 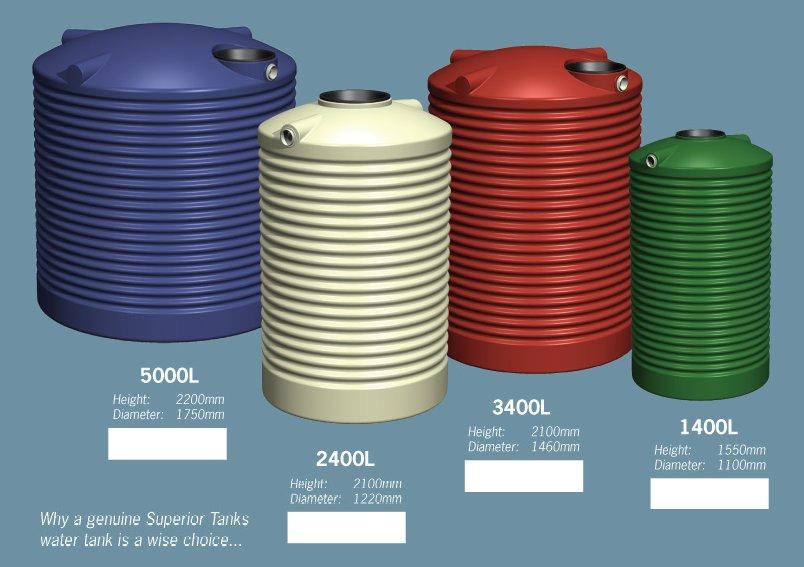 Plastic water tanks are available in different sizes and capacities
In case you use plastic water tanks, use black or dark blue coloured ones:The Scientific Reason – Dark colours prevent the sun’s rays from entering the tank unlike light-coloured or transparent tanks. The sunlight that enters will encourage algal growth. (Thanks to Manoj for the correction).
Two separate Overhead water tanks are preferred – One , for storing water for drinking, cooking etc and the other, for storing water for bathrooms, gardens etc: The Logic – Nowadays, due to the shortage of piped water, it is advisable to use this water only for cooking and drinking purposes, as it is generally chlorinated, purified water. The water from an additional water source, like Well or Borewell within the site can be used for Bathrooms and Toilets as you may not be sure of the purity. Naturally the water from theses two sources should not mix and so it is better to have two separate tanks.
The Solar geyser should be above the level of the overhead water tank: to ensure proper flow of water, and all the equipment attached to the same should be installed in the South-East of the roof. The Scientific Reason – Since the South East is considered the corner representing Fire, ‘Vastu pundits’ generally recommend that all electrical and heat related appliances be placed in the South-East. That is the only scientific explanation!
The Overhead tanks are located on top of the roof and are accessed by the Staircase. Read the Vastu Guidelines for a Staircase here: